From the Iron Age, it can be upgraded into the Catapult, then the Heavy Catapult.

The stone thrower was an artillery weapon based on the principle of the lever. The stone thrower fired a heavy missile, usually a large stone or stone wrapped in burning oily rags. The missile was placed in a large basket at the end of the throwing arm. Tension was built up on the other end of the arm while the throwing basket was held taut against a fulcrum. When released, the throwing arm swung up and forward until checked, throwing the missile. Stone throwers were used primarily against fixed positions, especially cities and fortifications. Stones were used to knock down walls to open the way for an infantry assault. Fireballs set wood rubble on fire, burning out the defenders. Small stone throwers were also used on the battlefield to disrupt massed enemy formations, although the enemy rarely offered easy targets within range. The stone thrower was invented around 400 BC by Greeks seeking to capture an island fortress off the coast of Sicily.

A group of Stone Throwers 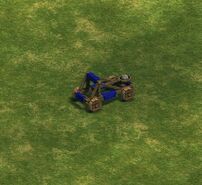 A Stone Thrower in the Definitive Edition
Community content is available under CC-BY-SA unless otherwise noted.
Advertisement