The Steppe Rider is a melee heavy cavalry in Age of Empires III: The Asian Dynasties that is unique to the Chinese and are trained as part of the Standard Army or (since the Definitive Edition) as part of the Mongolian Army.

Steppe Riders have a fairly low attack and hit points, but they are cheap and can be fielded in large numbers. They have a high multiplier against infantry, making them equally effective against units like Skirmishers and Crossbowmen as a Hussar. They are also classified as a siege unit, giving it good resistance to building fire, but making them especially vulnerable to Minutemen fire. Steppe Riders are not used as much beyond the Commerce Age, as the Chinese have other, superior hand cavalry units that become available to them at that time.

The Mongolian Scourge card increases Steppe Riders' attack against Villagers to that of a Hussar, making them extremely good raiders. They are a lot easier to mass-produce, as they are cheaper and are shipped in larger numbers. This card is fairly important if a player is planning on raiding a lot with Steppe Riders, as a single Villager with Great Coat and Blunderbuss (or other civilizations' equivalent) will quite easily beat a Steppe Rider in melee. Steppe Riders' biggest advantage as a unit is their excellent siege.

Exalted Steppe Riders are almost exactly as strong as un-upgraded Hussars, but cost only one population.

As Steppe Riders are unique to the Chinese, only technologies that they have access to are shown in the following table:

As Steppe Riders are unique to the Chinese, only their cards and other civilizations' TEAM cards are shown in the following tables: 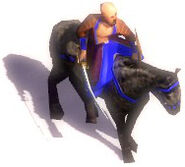