The Steppe Lancer is a cavalry unit in Age of Empires II: Definitive Edition that can be trained at the Stable once the Castle Age is reached. It is a light cavalry unit which carries a long spear and can attack at range, albeit it is very short. It is considered a regional unit as it is only available to the Cumans, Mongols, and Tatars. All three civilizations can upgrade Steppe Lancers to Elite Steppe Lancers.

Steppe Lancers are most effective in large groups, as their range enables them to attack from behind another in a similar fashion to the Incan Kamayuk. Their range allows them to attack through walls, making them good at defending or attacking in walled areas. This also means they can be a great defense against enemy rams. They can be considered medium cavalry as their other base stats and cost sits on the middle-ground between the Knight and Light Cavalry lines. Masses of Steppe Lancers work especially well in choke points, and in these circumstances they may be preferred over Knights, since they can hit from behind another.

On an individual level, a Steppe Lancer will lose against a Knight, but if reaching a critical mass they may overturn them on equally spent resources, as they are cheaper in terms of gold and have a bigger damage output as they can attack from behind another. All the civilizations able to train Steppe Lancers (Mongols, Tatars and Cumans) are also strong Cavalry Archer civilizations, and are a great company for the Steppe Lancer. The same applies for both Mangudai and Kipchaks. Against masses of archers, like Crossbowmen, the low pierce armor of the Steppe Lancer might be a problem, with the adding of Light Cavalry or Hussar to the mix of Lancers as a possible solution.

Against both ranged and melee units, micromanagement is critically important when the player decides to go for masses of Steppe Lancers. A combination of quick Patrol and Stand Ground moves into full aggression (i.e. switching to Aggressive Mode) helps take advantage of their range and engage with as many units as possible on the first strikes.

Probably the best ways to counter an army of Steppe Lancers are with camel units (especially Mamelukes and Imperial Camel Riders), Genoese Crossbowmen, and Kamayuks. Being a cavalry unit also means that masses of Halberdiers and Viking infantry (with Chieftains) can be a threat to Steppe Lancers. Their low pierce armor also makes them much more vulnerable to ranged units and static defenses than other cavalry units. Their low pierce armor combined with their tendency to stay clumped together make them weak against Scorpions, since Scorpions are very strong against clumped-up targets with low pierce armor.

All civilizations that have access to the Steppe Lancer have a bonus that may make their use slightly different:

Comparison in the Castle Age[] 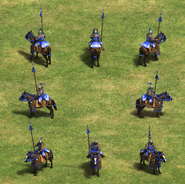 A group of Steppe Lancers 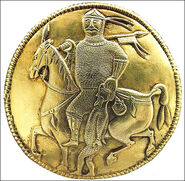 A mounted lancer, of undetermined ethnicity, with captive and a dead foe's severed head, on an ewer from Nagyszentmiklós Treasure