22 feet
The Sphinx is a legendary human-faced leonine creature in Age of Mythology. It is a myth unit available in the Classical Age to worshipers of Bast.

Powerful at melee, Sphinxes deal both hack and crush damage - this, combined with their high speed, low cost and early availability makes them excellent rush units. They deal high bonus damage to myth units as well. Sphinxes have a special attack that consists of them turning into a sandstorm, dealing multiple ticks of damage to the enemy that they have targeted. Bast offers two sphinx-specific upgrades, renaming them Criosphinxes and finally Hieracosphinxes; the two upgrades improve every aspect of the sphinxes, including their hit points, speed, and attack.

In addition to these attacks, Sphinxes also make great siege units. Because of their high hit points and large crush attack against buildings, the Sphinx can easily be used in a rush to destroy an enemy's economy early in the game.

"Sphinx" was originally a Greek word ("to strangle") that was applied to the pharaoh-headed lion statues that the Greeks saw in Egypt, that Herodotus named "androsphinx". The Greek sphinx was a monstrous brood of Typhon and Echidna, usually depicted as a winged lion with a female head. She sat on a rock near Thebes and asked passersby the now famous question, "What animal is that which in the morning goes on four feet, at noon on two, and in the evening upon three?" Those who could not answer were eaten. Oedipus knew the correct answer (humans) and caused the sphinx so much consternation that she cast herself from her rock and died.

The Egyptians called their sphinxes "Hu". In addition to the man-headed androsphinx, they also depicted ram-sphinxes that Herodotus named "criosphinxes" and falcon-headed sphinxes named "hieracosphinxes". 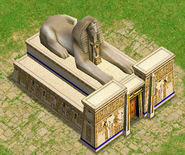 Wikipedia has an article about:
Sphinx
Retrieved from "https://ageofempires.fandom.com/wiki/Sphinx?oldid=262197"
Community content is available under CC-BY-SA unless otherwise noted.