The Spearman is an infantry unit in Age of Empires II that can be trained at the Barracks once the Feudal Age is reached. They are a good early cavalry-counter, but are weak against virtually everything else. If not upgraded, a Spearman is one of only two military units (the other one being the Skirmisher) to lose outright to a Villager with Loom. Since no gold is required to train them, Spearmen are considered trash units.

Spearmen are very cheap and massed easily, allowing them to overwhelm enemy cavalry. They are useful in preventing early Scout Cavalry charges, but against Castle Age cavalry such as Knights or Cavalry Archers they should be upgraded to the more effective Pikeman. Players generally use this unit to defend their base against cavalry raids.

The Spearman line, with the Spearman on the left. In the Definitive Edition. 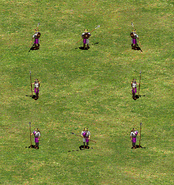 A group of Spearmen 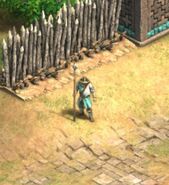 Spearman in the Definitive Edition

A soldier armed with spear, sword, & shield, from a 1109 copy of Commentary on the Apocalypse by Beatus of Liébana
Español
Community content is available under CC-BY-SA unless otherwise noted.
Advertisement