The Spahi is a melee heavy cavalry unit in Age of Empires III that is unique to the Ottomans and can only be shipped from the Home City or chosen as an age up reward when aging to the Industrial Age. It is the second strongest melee cavalry unit in the game, behind the Mahout Lancer.

The Spahi is effective against enemy Skirmishers, archers, Shock Infantry and artillery, but can be countered by heavy infantry and light cavalry. The Spahi fights with a mace, and deals damage over a certain area rather than a single unit. It is considered one of the most effective units in the game and is almost twice as strong as a Cuirassier. 5 Spahis can be sent as a Fortress Age shipment, costing only 1000 food to ship, which means a player can get the equivalent of 9 Cuirassiers in just one Fortress Age shipment, making it one of the best shipments in the game.

Spahi have a special trait; like the Explorer and his dog, they can regenerate hit points, allowing them to last longer in a game.

The Spahi is automatically upgraded in Industrial Age and Imperial Age. Unlike other units, however, their name is not changed to reflect this. 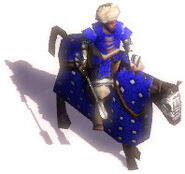 The Spahi's history portrait. This visual shown would be used for one of Spahi's visual upgrades called "Elite Spahi", when it was an Ottoman variant of the Hussar.
Community content is available under CC-BY-SA unless otherwise noted.
Advertisement