Sonora is a map in Age of Empires III.

Attention should be paid, as the minor native tribes were replaced by new ones in the expansions.

A twisting Trade Route winds its way through this barren, desolate region. Many cliffs and canyons create choke points. Resources can be difficult to find, though sometimes there are rich ore deposits in the center of the map. Search for natives villages on the edge of the map.

Players start off with several Berry Bushes near their starting position, as an early way to obtain food - however, many other resources are starved, and players must head out into the wilderness in order to find mines, herds of buffalo, and wood groves.

The map has many rock faces and canyons scattered around the map which can create interesting choke points. There is also a Trade Route with five Trading Post sites on it. 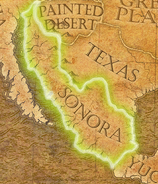