Transforms a Pharaoh into Son of Osiris
Son of Osiris is an Egyptian Mythic Age god power in Age of Mythology that is available to worshipers of Osiris. It is invoked on a player's Pharaoh, and the targeted Pharaoh is instantly transformed into the mighty Son of Osiris, with a falcon head, a staff, and a deadly lightning attack.

18
The demigod Son of Osiris retains the same empowering and healing abilities of a normal Pharaoh, but his HP and combat powers are greatly increased. He can fire chain-lightning bolts that deal vast amounts of hack damage and can hit up to four targets. The Son of Osiris cannot be healed, and if he dies, a normal Pharaoh will reappear.

Ra enables drop sites empowered by the Son of Osiris to yield 25% more resources instead of 20%.

The Son of Osiris retains his heroic damage multiplier against myth units, meaning his attack against them is a devastating 300. Therefore, he is superb against myth unit-heavy armies, though he still deals good damage against human units and even other heroes. He can even help with Titan-killing due to this massive ranged attack.

He is much stronger than a regular Pharaoh, but due to his prowess in combat, slow attack speed and inability to be healed, he is a prominent target for the player's opponents. The Son of Osiris can easily be defeated if targeted by a large number of enemy units. Also, when the Son of Osiris god power is used to create this unit, enemy players receive a notification. Alerted to his presence, they have time to plan a counterattack against this new foe. The player should bear this in mind, and protect the Son of Osiris with a supporting army, and avoid engaging directly with Zeus players who can kill him with Bolt (however in the Extended Edition, Bolt only deals 1% damage to the Son of Osiris). The Son of Osiris is an excellent counter to the Nidhogg and Vermilion Bird (so long as the latter does not come in too large of a number for the Son of Osiris to kill most or all of them without losing too much health), especially if upgraded with Funeral Rites in the Extended Edition, which allows him to deal an extremely devastating 540 damage. 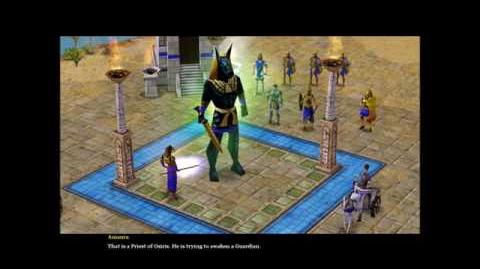 A special version of Son of Osiris (known as Son of Osiris XP in the editor) appears in the Cerberus scenario of The New Atlantis campaign. This unit is identical to Son of Osiris with the exception of being able to be healed but lacking the ability to heal other units. He is the only one able to wake the Guardian and the scenario requires him to do so in order to defeat Cerberus.

Son of Osiris waking up the Guardian in The New Atlantis

Son of Osiris from a different angle

The Son of Osiris' chain lightning attack will bounce to other enemy units that are adjacent to the primary target.
Community content is available under CC-BY-SA unless otherwise noted.
Advertisement