The Soldado (literally "Soldier") is a heavy infantry in Age of Empires III: Definitive Edition that is unique to the Mexicans. The unit is also available to the Spanish through the Home City-only building 'Haciendas', sacrificing Villager work time to spawn free Soldados, similarly to Native American Ceremonies.

It is a Musketeer with higher hit points and attack, and uses grenades to attack buildings like that of Grenadiers, but are more expensive, takes longer to train, and uses up two population.

The Soldado replaces the Musketeer and is unique to the Mexicans. It is available starting in the Commerce Age, and like the Musketeer, is effective against Cavalry and Shock Infantry, but weak vs Light Infantry. Soldados are stronger and have a a fast bayonet attack, but slower to train and take two population slots rather than one.

As Soldados are unique to the Mexicans, only technologies that they have access to are shown in the following table:

As Soldados are unique to the Mexicans, only their cards and other civilizations' TEAM cards are shown in the following tables:

The "Santamaria's Fire" card is retained upon reverting to Mexico

Soldado image from the Compendium section 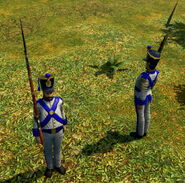 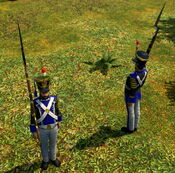