Age of Empires Series Wiki
Register
Don't have an account?
Sign In
Advertisement
in: Age of Empires III, Wildlife, Treasure Guardians,
and 3 more

2-3
The Snow Leopard is introduced in the Definitive Edition, and is one of several hostile animals that the player may encounter in unexplored areas. Like the Wolf, it has 25 HP, 3 attack, holds no food, and attacks Villagers and even some military units on sight. As it will most likely prevail against Villagers that do not have the Loom upgrade, it is recommended to research it before sending them in unexplored areas. Snow Leopards appear in some winter- and mountain-themed random maps, for example Mongolia.

10
The Snow Leopard is a Treasure Guardian in Age of Empires III: The Asian Dynasties. It is a big and fairly powerful feline predator, but not quite as powerful as its big cousins the Lion and Tiger. Two Monks or one Explorer are enough to eliminate them but they can cause great damage to units.

They are found in Himalayas, Mongolia, and the mountainous variant of the Silk Road. Unlike other Treasure Guardians, there is no pet version of the Snow Leopard and they can only be tamed by War Chiefs. 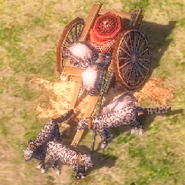