Age of Empires Series Wiki
Register
Don't have an account?
Sign In
Advertisement
in: Age of Mythology, Archaic Age, Atlantean buildings,
and 3 more

Age of Mythology: The Titans

5
Sky Passages are buildings in Age of Mythology: The Titans that are only available to Atlanteans following Oranos. Sky Passages are cheap, but extremely efficient tactical devices, and one of Oranos's unique features. Sky Passages are tactically useful because they allow rapid movement of troops. Up to thirty units at a time can be put inside and can exit out of any Sky Passage on the map. One Sky Passage can be built near an empty settlement, and multiple citizens can suddenly teleport to it to build it quickly. If attacked, multiple military units can instantly be deployed.

Sky Passages can be upgraded with Safe Passage, which reduces the cost and adds a weak attack to defend themselves. Because up to 10 Sky Passages can be built, and because they allow for an unlimited number of teleports, Sky Passages are one of the most tactically sound buildings in the game. 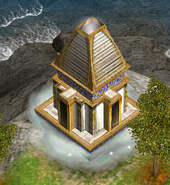