The Skull Knight is a melee heavy infantry in Age of Empires III: The WarChiefs that is unique to the Aztecs and can only be obtained through Garland War Ceremony and Tezcatlipoca Worship, or shipped from the Home City.

Similar to the German Doppelsoldner and the Japanese Samurai, the Skull Knight possesses high hit points, deals Area of Effect damage, has a massive siege damage against buildings, and has multipliers against cavalry. Although highly effective in melee combat, its low speed renders it vulnerable to artillery.

Skull Knights work well when used in numbers due to effects of their splash damage and resists against melee damage, but it is recommended to support them with Arrow Knights, since the latter's high range deals increased damage to counter artillery. Another strong combination is with the Coyote Runner, since they reach and attack ranged units more quickly, not only artillery but also infantry.

Obsidian Storm (automatically activated when attacking with a cooldown of 15 seconds): The Skull Knight performs a sweeping hand attack that does +50% of their normal hand attack, with 4 AOE. This is always based on their hand attack, meaning the Great Temple of Huiztilopochtli Support card increases the area of effect of this ability, as well as any attack increases boosting its damage, notable their War Ceremony at the Community Plaza, making this a devastating melee ability if well utilized.

The Skull Knight is automatically upgraded in every Age from the Fortress Age.

As Skull Knights are unique to the Aztecs, only technologies that they have access to are shown in the following table:

As Skull Knights are unique to the Aztecs, only their cards and other civilizations' TEAM cards are shown in the following tables: 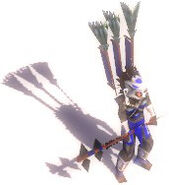 The Skull Knight from the in-game history section