The Skirmisher is a ranged gunpowder infantry in Age of Empires III that can be trained at Barracks, Fort, and Galleon/Fluyt once the Fortress Age is reached.

Skirmishers are available to European civilizations except British, Knights of St. John (Act I: Blood campaign), Ottomans (who have Abus Guns instead), Portuguese (who have Cassadores instead), and Russians (who have Strelets instead).

Skirmishers have a long-ranged attack that is suited to kiting the enemy from afar. They are strong at countering and defeating heavy infantry and ranged cavalry, but highly vulnerable to melee cavalry and artillery due to their relatively low hit points and a weak melee attack. They cost a relatively high amount of gold and it is not cost effective to use them against melee cavalry.

Typically they are used to create a strong mass ranged platform to support the rest of the army. Their long range ensures they can put all their damage to bear as fast as possible and makes them easy to control while kiting. They are effective against enemy Skirmishers and other ranged infantry, but their counter damage wards off cheaper heavy infantry attacks in melee, as well as harassment from fast ranged cavalry. When in position near enemy Settlers their range also makes them effective at harassing them while not committing too much to a bad position should a fight occur. When fighting heavy infantry it is advisable to take an Armory towards the time of the Industrial Age, in order to unlock Counter Infantry Rifling for an effective extra 50% attack against those units. Skirmishers are capable of sieging buildings, but this is a risky strategy due to the poor positioning required to do so, along with slow speed and low siege damage. It may be better to use them defensively in support of Falconets or Halberdiers instead.

Spanish Unction-boosted Skirmishers will inflict 54.675 damage before multipliers with all attack upgrades that do not require an ally or minor native upgrade. French Skirmishers have the highest stand-alone HP in the endgame (as Imperial Voltigeurs), as they have a Royal Guard Upgrade (10%) and 15% and 20% hit point Home City Cards available to them.

The Cherokee Rifleman and Klamath Rifleman are comparable to Fortress Age Skirmishers but with much higher hit points and may be useful for civilizations that lack access to regular Skirmishers. They are available on maps featuring the Cherokee or Klamath, and available earlier in the Commerce Age. Note that these units cost wood instead of coin.

The Skirmisher starts at the Veteran level, giving them +20% hit points and attack.

If they are made available in the Commerce Age with the "TEAM Early Skirmishers" Home City Card, Skirmishers will be automatically upgraded to Veteran once the player reaches the Fortress Age.

The Karelian Jaeger is a variant of the Skirmisher unique to Finland, which replaces Revolutionaries with the following differences:

Karelian Jaegers are the only revolutionary unit that can be upgraded (to the Guard level at the Blockhouse).

In-game stats of a Veteran Skirmisher

In-game stats of a French Voltigeur 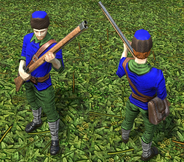 An in-game (Veteran) Skirmisher in the Definitive Edition 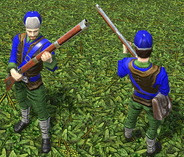 An in-game Guard Skirmisher in the Definitive Edition 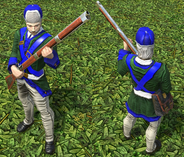 An in-game Imperial Skirmisher in the Definitive Edition 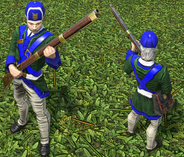 An in-game Consulate Skirmisher in the Definitive Edition