+3 vs Archer
+3 vs Spearman
0 vs Cavalry archer

Skirmishers are very weak to everything except archers. With a weak and slow attack, as well as a minimum range, they deal almost no damage to infantry and cavalry. However, their attack bonus against archers can make them valuable against any archer-using opponent, especially if the player's civilization's bonuses benefit infantry or heavy cavalry. Their anti-archer role is helped greatly by their impressive base pierce armor, which can highly reduce enemy pierce attacks.

Unless created to retaliate against enemy archers, Skirmishers make poor ranged support. Thus, training Skirmishers should be avoided unless opponents are going heavy on archer units.

As Skirmishers cost no gold, they are considered trash units and as such they become especially important in the late game when gold becomes scarce and players have to rely on a wood and food economy. However, because of their cheap cost and quick build time it is possible (in some circumstances) to overwhelm the opposition with sheer quantity.

Although Skirmishers deal bonus damage against Spearmen, their minimum range can be exploited by them. In small numbers, Spearmen can defeat Skirmishers, but in large groups the Skirmishers will win.

Skirmishers were Infantry or even Cavalry soldiers who were used ahead or alongside a much larger body of friendly troops and were put in a skirmish line to harass the enemy or to protect their own troops from similar attacks by the enemy. They were usually lightly armored so they could move around the battlefield quickly and usually had longer ranged firearms. In earlier battles, skirmishers were often the rabble that was thrown into the battlefield at the start of a battle before being overrun by the cavalry of both sides. As warfare evolved, however, skirmishers became a valuable commodity, harassing fleeing armies and capturing loot. 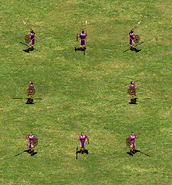 A group of Skirmishers.

A group of Skirmishers support Men-at-Arms during an enemy town raid.
Español
Community content is available under CC-BY-SA unless otherwise noted.
Advertisement