Age of Empires Series Wiki
Register
Don't have an account?
Sign In
Advertisement
in: Age of Mythology, Tale of the Dragon, Mechanical artillery,
and 3 more

28 feet
The Sitting Tiger is a Chinese siege weapon in Age of Mythology: Tale of the Dragon.

Shennong allows Sitting Tigers to deal area of effect damage and have +10 Base Pierce attack.

Tale of The Dragon[]

Hudun Pao, "crouching tiger" or "sitting tiger," is an ancient Chinese siege machine which launched a projectile from a sling at the end of its arm, which was mounted on a rigid triangular frame.

The Sitting Tiger is an early version of the traction trebuchet, which means that it was powered by the pulling force of men on ropes attached to the short end of the arm. The engine was smaller and had shorter range than its larger counterweight-driven counterparts, but this made it far more portable. 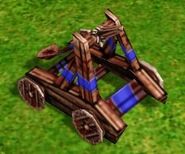 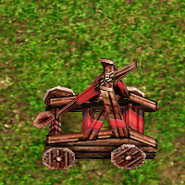 Sitting Tiger with and without Engineers

A wheeled traction trebuchet from Complete Essentials of Military Classics
Community content is available under CC-BY-SA unless otherwise noted.
Advertisement