The Sioux War Chief is a melee cavalry hero in Age of Empires III: The WarChiefs. It explores uncharted areas of the map and has some special abilities to help himself and his tribe. In standard random map games, the Sioux starts with a Sioux War Chief.

The Sioux War Chief increases the speed of friendly units in a radius of 24 around him by 20%; the Command Skill Home City Card will make his aura also increase attack by 10%. As all War Chiefs do, he can convert Treasure Guardians, detect stealth units, claim Treasures and build Town Centers and Trading Posts. Like other explorer-type units, the Sioux War Chief will collapse instead of dying and can be rescued once he recovers enough health, although the War Chief Dance at the Fire Pit allows the player to return him there after a while as well as increasing his hit points.

The Sioux War Chief is the fastest hero unit in Random Map games.

Nature Friendship: Converts a treasure guardian to the Sioux War Chief's side with the process taking 4 seconds to complete. 90 seconds cooldown.

Swashbuckler Attack (requires Counting Coup Home City Card): The Sioux War Chief performs a sweeping hand attack that does 50 (12.5 against villagers, 5 against Spies and Ninja) melee damage to the target and other enemies in a radius of 3 around him. 90 seconds cooldown.

The Sioux War Chief is automatically upgraded in every Age up.

As the Sioux War Chief is unique to the Sioux, only technologies that they have access to are shown in the following table:

As the Sioux War Chief is unique to the Sioux, only their cards and other civilizations' TEAM cards are shown in the following tables:

"War chiefs, typically young men in their prime, were responsible for leading warriors into battle. Even though they led their tribe's war efforts, they had to answer to a council of tribal leaders who attended to the daily affairs of the tribe.

One of the most renowned war chiefs was Sitting Bull (1831-1890), also known as Tatanka Yotanka. Born in the territory of present-day South Dakota, he was renowned as a Sioux medicine man and prophet. Sitting Bull led Native resistance against U.S. government attempts to take over tribal lands, which included his involvement in the Battle of the Little Bighorn with his lieutenants Crazy Horse and Gall. After spending several years in Canada with his followers, Sitting Bull returned to the U.S. under a government amnesty program." 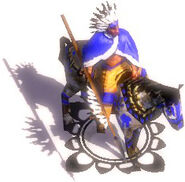 A fallen Sioux War Chief
Add a photo to this gallery

Retrieved from "https://ageofempires.fandom.com/wiki/Sioux_War_Chief?oldid=262006"
Community content is available under CC-BY-SA unless otherwise noted.