Age of Empires Series Wiki
Register
Don't have an account?
Sign In
Advertisement
in: Age of Empires III, The Asian Dynasties, Maps,
and 2 more

The Silk Road is a random map in Age of Mythology: Tale of the Dragon and Age of Empires III: The Asian Dynasties.

Age of Mythology: Tale of the Dragon[]

The map has several trading posts scattered evenly which are in fact Plenty Vaults. Unlike in King of the Hill, maintaining control of a vault does not cause a player to win after a countdown, but merely provides them with a trickle of food, wood, and gold. Capturing these early on with scouts can grant a player with an economic advantage over the enemy. The location of each vault is revealed to all players. Roads terrain indicates the shortest path from one vault to another. There are some Ducks near the starting Town Centers and Deer available to hunt.

Hazards include Lizards, who will attack worker units that approach too closely. As it is a Chinese map, Jade Mines are present rather than Gold Mines, and the trees featured are Jungle Trees.

The map is based on the real Silk Road, however it randomly picks a spot along the Silk Road so that the player can play on a different part of the road every time. There are three different environment varieties: Chinese temperate forest with many Bamboos, Central Asian desert and a mountainous land, similar to the one in the Himalayas.

The Silk Road also features a unique type of Trading Post, named Silk Road Trading Site. Instead of the player having to build a Trading Post, players must first kill the guardians in order to claim them for their own and use them. The guardians will always be either 4 Blind Monks, 4 Smugglers or 4 Masterless Samurai, depending on the environment varieties.

Hidden in the coding for the map is a flat 50 XP bonus for the Ottomans. However, the unique Trading Posts on the map are only 1/3rd as effective as a normal Trade Route sites. 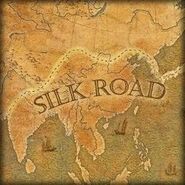 A Silk Road Trading Site found in the Silk Road map in Age of Empires III
Community content is available under CC-BY-SA unless otherwise noted.
Advertisement