Siege weapons in Age of Empires II are one of the four combat forces on land, the other ones being archers, infantry, and cavalry. They are powerful units that excel at destroying enemy buildings or massed units.

Siege weapons are the most diverse class of military units in the game. Some attack at close range, like rams, and others at mid-to-long range, like Trebuchets (which are the longest ranged units in the game); some are suicide units, like Petards; and one, the Siege Tower, has no attack, and is used to ferry Infantry and Archer units over walls instead.

Siege weapons that are predominantly organic (namely the Petard, the Ballista Elephant, and the Flaming Camel) cost food and gold to create, can be garrisoned in Castles (but not in other Siege Weapons), and are healed by Monks. Those that are mechanical, on the other hand, cost wood and gold, and have to be repaired by Villagers in a similar manner to buildings and ships. Repairing siege weapons costs gold. Bombard Cannons and Organ Guns belong to the second category despite having a visible human operator, unlike non-gunpowder siege weapons.

Generally speaking, siege weapons are the most expensive units and take longest to train. Bombard Cannons and Flaming Camels also require Chemistry and Timurid Siegecraft to be researched before becoming available, respectively.

Besides Monks, siege weapons are the only units that cannot be converted initially. Redemption must be researched in order to convert siege weapons.

All siege weapons are slow and vulnerable to melee units, even if they can attack at close range. As a result, they should be protected by other units or fortifications.

Depending of their use, siege weapons can be broadly divided into those whose main purpose is to destroy buildings, and those that excel against enemy units.

Trebuchets, Mangonels, and Bombard Cannons can be ordered to attack ground, even when there are no enemy units in place at the time. This makes possible to hit units arriving later at a spot (for example, after being lured there or while in patrol), and (excluding Trebuchets) to kill units belonging to the same player or to an ally without having to change Diplomacy first (for example, if they get stuck in a bottleneck).

Trebuchets, Onagers (since The Forgotten), Siege Onagers, and Ballista Elephants can also be ordered to destroy trees, making them the only units able besides Villagers. This can be of high strategic importance in maps with dense forests, e. g. Black Forest.

Listed below are all technologies that benefit siege weapons. Marked with yellow background are unique technologies. This list does not contain unit upgrades.

The Bulgarians, Slavs, Celts, Mongols, and Ethiopians have the best siege weapons due to their civilizations bonuses and unique technologies. The Britons, Huns, Japanese, Khmer, Koreans, Tatars, and Teutons have also strong siege weapons, through less prominent than the before-mentioned civilizations.

The Lithuanians have the weakest siege weapons, as they lack the final upgrades to all of their siege units and Siege Engineers. The Huns and Turks are the only civilizations that cannot upgrade their Mangonels into Onagers.

The Ethiopians are the only civilization to have access to all units from the Siege Workshop.

The following civilizations have bonuses that benefit siege weapons:

The following civilizations have team bonuses that benefit siege weapons:

All siege units trained at the Siege Workshop 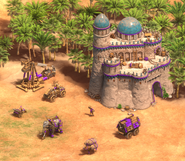 Early render of the Scorpion with an operator
Community content is available under CC-BY-SA unless otherwise noted.