The Siege Workshop is a military building in Age of Empires III: The WarChiefs that is unique to the Iroquois and becomes available once the Fortress Age is reached. It fulfills a similar role to the European Artillery Foundry.

As Siege Workshops are unique to the Iroquois, only technologies that they have access to are shown in the following table:

As Siege Workshops are unique to the Iroquois, only their cards and other civilizations' TEAM cards are shown in the following table:

"The manufacture of artillery is a laborious process involving furnaces and cranes to move the heavy barrels through several stages of construction." 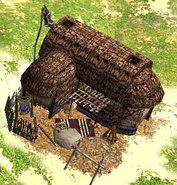 In-game Siege Workshop
Add a photo to this gallery
Retrieved from "https://ageofempires.fandom.com/wiki/Siege_Workshop_(Age_of_Empires_III)?oldid=257990"
Community content is available under CC-BY-SA unless otherwise noted.