The Siege Tower is a siege unit introduced in Age of Empires II HD: The Forgotten that was only available in a few campaign scenarios and the Scenario Editor.

Since The African Kingdoms, it is trainable at the Siege Workshop. Its purpose is to unload foot soldiers beyond enemy walls, enabling troops to quickly penetrate an enemy settlement.

The Siege Tower has a high amount of hit points and pierce armor for a siege unit, and is capable of firing volleys of arrows at nearby enemies for defense. Despite this, however, it is almost useless against fortifications, even losing a one-on-one battle against a Watch Tower, but rather shines as a decent armored troop transport similar to the Battering Ram.

Garrisoning soldiers inside the Siege Tower will increase its speed, but not the amount of arrows it fires.

A new variant of the Siege Tower was introduced in The African Kingdoms. This variant is hidden in the Scenario Editor, but still exists in the game files.

The Siege Tower in The African Kingdoms has changed functionality, gaining the ability to unload garrisoned troops on the other side of a wall, while losing its attack. It can help bypass base fortifications, avoid raising enemy suspicion too quickly, and reduce the time spent on destroying walls for entry during a siege.

A fully garrisoned Siege Tower also has a speed of 1.3, as fast as an Elite Eagle Warrior without Squires. This makes it an effective armored land transport, which can move vulnerable units such as Gbetos or Shotel Warriors through enemy pierce attacks with relative safety. Its speed also aids the transport of slow, kitable infantry, such as Teutonic Knights. The Mongols may utilize Drill to make their Siege Tower one of the fastest possible land units (with a speed of 1.7 when fully garrisoned). Should they garrison 10 units within, and have researched Drill, their Siege Towers will race even a Hussar with Husbandry.

To make the Siege Tower unload troops over walls, it must be instructed to attack the wall section that the player wishes to unload over. This is opposed to simply ungarrisoning the troops, which will merely make them reappear around the tower. This behavior is in some ways counter-intuitive due to Siege Towers having a unique mechanic, without it being explicitly explained in game.

The Siege Tower cannot unload if there is not enough room on the other side, or if there are multiple layers of walls blocking it. As it can no longer attack, the Siege Tower becomes highly vulnerable towards melee attackers and should be escorted until contact with an enemy wall is made and the troops inside are deployed.

Another factor that makes Siege Towers difficult to use is the way unit pathing works in Age of Empires II. Oftentimes, the Siege Towers will not move in ways the player intends, especially when trying to position the Siege Tower next to a wall.

Siege Towers can help to defend walls against sieges, when paired with infantry, such as the Elite Eagle Warrior. Should enemy units block a player's Gate, a group of 10 Eagles may vault their own wall (where deployment space exists), ambushing and dismantling siege weapons such as rams. Alternatively, Halberdiers can be deployed against cavalry assaults, and Condottiero can likewise counter Bombard Cannons.

Siege Towers also provide protection to allied units behind them from arrow-fire of enemy fortifications (but not from projectiles of enemy units or ships). As long as the projectiles from the enemy defenses hit the collision box of the Siege Tower, it absorbs all the damage and the units behind remain safe.

This cover from arrow-fire is also provided by all the rams. Due to their larger size, Siege Towers can provide better cover to several units behind them, but they have a tendency to move away when under attack as their stance can not be set.

The siege tower or belfry was a wheeled wooden structure used to get over the city walls. The outer part of a siege tower was often covered with animal hides to make it fireproof. For further protection against hostile troops, siege tower carried archers who fired from inside and top.[1] 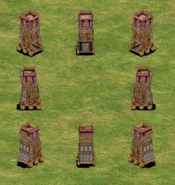 A group of Siege Towers

In The Forgotten, Siege Tower had the ability to attack.

Many views of the Siege Tower in Age of Empires II: Definitive Edition.

Many views of the original Siege Tower in Age of Empires II: The Forgotten.