The Siege Onager is a ranged siege unit in Age of Empires II that can be trained at the Siege Workshop once the Imperial Age is reached. It is primarily used against large groups of enemies. Its high attack and splash damage make it a powerful unit, especially against archers and slow-moving units. Its main offsets are its low movement and projectile speed, minimum range, high cost, and tendency to harm friendly units caught in its blast.

Siege Onagers can attack the ground and cut down trees, making them very useful in cutting a quick path to somewhere.

The * indicates that the civilization can fully upgrade their Siege Onagers, i.e. gets Siege Engineers. Faith and Heresy are not taken into account because they only contribute to their combat strength in a very situational manner.

The ^ indicates that the civilization has at least one civilization or team bonus or a unique technology that benefits the combat strength of the Siege Onager.

Siege Onagers are arguably the most powerful siege weapon when it comes to killing other units. They are devastating against archers and slow-moving units, they excel at crushing other siege weapons, but cannot defend themselves against most melee units. Therefore, they need to be guarded in most situations. Archers are often used, because own melee units are usually endangered by the own Siege Onagers. But archers do not cover the Siege Onager's main weakness adequately, which is cavalry. Therefore, Siege Onagers are also often paired with Halberdiers. That combination is especially prominent with the Bulgarians, Celts, Ethiopians, Koreans, Teutons and Slavs as all have either a civilization bonus or unique technology that benefit the strength of both.

As Siege Onager is one of the most expensive upgrades in the game (but also one of the most powerful), the player has to carefully weigh whether it is worth it in a 1v1 game, but it can definitely turn the tide of a game with a few good shots in the right situation. Compared to the Onager, the Siege Onager has more health, damage, and pierce armor, but perhaps more importantly has a larger blast radius, making shots harder to dodge and able to hit more targets.

Siege Onagers are very effective against naval units. The AI will also use Siege Onagers as a shore defense to protect its buildings.

Siege Onagers are able to cut down trees, making them valuable in maps with large areas of forests like Black Forest by enabling to the player to attack from behind a forest.

In the Ancient Roman Empire, Onagers were designed to be used against lightly fortified towns, and massive armies, and thus the upgrade of this, armed the Onager with metal plates, were built twice the size and could fire medium and even large boulders to weaken walls that rams were not able to access. However, the Byzantines do not have access to the Siege Onager, despite being the Roman Empire's continuation.

In Medieval Times, Mangonels and Trebuchets were used in sieges as they proved to be more useful against large fortified walls. 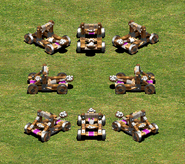 A group of Siege Onagers

The Mangonel line, with the Siege Onager on the right

A group of Siege Onagers cutting down trees 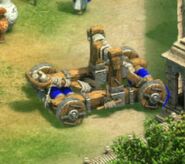 A Siege Onager in the Definitive Edition