18 feet
The Siege Junk is a Chinese naval military unit in Age of Mythology: Tale of the Dragon. It is strong against buildings and arrow ships.

Siege Junks are strong against Arrow Ships and buildings but weak against Hammer Ships. In the Heroic Age, defensive buildings can out-range them, so they are vulnerable to counterattack at that time. However, when upgraded in the Mythic Age, they out-range them instead, making them valuable in taking down shore defenses. This helps transports to land safely to enemy territory. Since they deal crush damage, Siege Junks are slightly effective against myth units.

As warships became longer, navies began to mount larger weapons on them, such as catapults and ballistae. With the added weight the ships had lost some maneuverability, and while the accuracy and range of the weapons on board were poor at first, the deadly impact the siege could inflict on enemy navies turned out to be revolutionary. 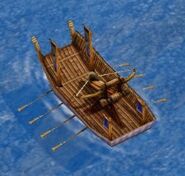 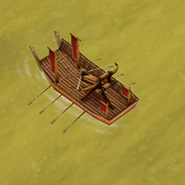