Age of Empires Series Wiki
Register
Don't have an account?
Sign In
Advertisement
in: Age of Empires III, Artillery, Fortress Age,
and 3 more

The Siege Elephant is an artillery unit in Age of Empires III: The Asian Dynasties that is unique to the Indians and can be trained at the Castle once the Fortress Age is reached, and the Agra Fort wonder once it is upgraded to Red Fort. It is an elephant with a siege cannon mounted on to its back.

The Siege Elephant is effective against buildings, ships and artillery. It is by far the most durable artillery unit of the game with the HP of a war elephant.

They have the advantage in mobility compared to many other artillery units as they don't need to stop and set up before following. This allows for quick and destructive attacks against enemy structures. They can also flee losing battles as they are faster than normal cannons – especially with the Terror Charge aura effect. However, despite its brutal strength, the Siege Elephant can fall if overwhelmed with hand cavalry units.

They are categorized as light cavalry, making Axe Riders less effective against them (until Bonepipe Armor is researched), but also making Skirmishers, Abus Guns, Fusiliers, and archers a large threat. They are also categorized as artillery, meaning that Culverins (or similar units) and ranged cavalry (especially Rifle Riders and Yabusame) counter them as well. Finally, being an artillery unit in general, they are countered by melee cavalry – certain ones such as Meteor Hammers and Kanya Horsemen possess powerful multipliers as well. In fact, the only class of units (apart from standard artillery, which Siege Elephants counter) which is quite poor against Siege Elephants is Pikeman-style units, which have very low base damage and no multipliers against Siege Elephants. Even Grenadiers and Flamethrowers perform quite well against them when in range.

Imperial Service (passive): The Mansabdar Siege Elephant increases the hit points and attack of Siege Elephants in a radius of 24 around them by 10%.

As (Mansabdar) Siege Elephants are unique to the Indians, only technologies that they have access to are shown in the following table:

As (Mansabdar) Siege Elephants are unique to the Indians, only their cards and other civilizations' TEAM cards are shown in the following tables: 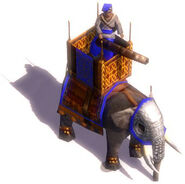 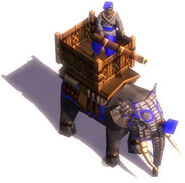 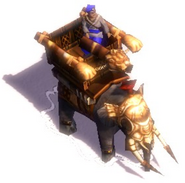