Age of Empires Series Wiki
Register
Don't have an account?
Sign In
Advertisement
in: Article stubs, Age of Empires III, Maps,
and 2 more

Siberia is a Real World map introduced in the Definitive Edition. The map is divided in half, with the eastern part mainly water (with some islands) and the western part land.

There are some resources on the map, so long wars of attrition or short offensives will decide the gameplay. Siberia contains the Tengri Shrine native site.

The map features a frozen, vast plain in Northern Asia, with average amounts of taiga trees. Players (and in larger games, teams) start directly opposed to each other, in either the northwestern or the southeastern parts of the map.

Players also start with a tower in their positions, a type of Outpost, that makes early rushes more difficult. Nearby, a Treasure might be found that features a trapped Snow Monkey. Should they free it, it can be used as a scout.

Along the player's Town Center, there will be small clumps of trees of no more than 4-5. This will often cause players to move their Settlers, Villagers, or Coureurs from one small clump of forest to the other making them vulnerable to attack. However, the map's extraordinarily large size somewhat makes up for this.

Players/teams are divided by a great frozen river, where there are almost no resources, save for a few herds of Musk Deer or Saigas. This technically creates a "no man's land", that can slightly complicate expansionistic actions, especially if players often patrol their lands, to defeat Fort Wagons and other similar wagons that may try to place defenses.

A Trade Route is encountered to the southwestern corner of the map, featuring trade sites tat vary in number, depending on the map's size and players. There are great numbers of huntables, found in herds all around the map. 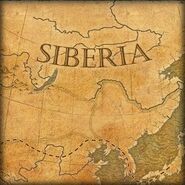