Shun has the ability to knock back enemy soldiers and deal damage similar to Kastor in The New Atlantis campaign. He can also regenerate 1.5 HP per second. Shun cannot be killed: if his HP reaches 1, he merely faints and can be resuscitated if approached by allied units.

Shun is first encountered in Rising Waters, where his town has been ravaged by a flood and being attacked by Lizards and War Salamanders from the Underworld. Emperor Yao's finest general, Jiao-Long offers to help Shun rebuild the Dam destroyed by the flood. After the Dam is rebuilt, Shun follows Jiao-Long throughout the remainder of his journey to restore Yin and Yang. 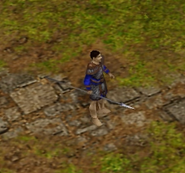 Shun in-game
Add a photo to this gallery

Wikipedia has an article about:
Emperor Shun
Retrieved from "https://ageofempires.fandom.com/wiki/Shun?oldid=280089"
Community content is available under CC-BY-SA unless otherwise noted.