The Shrivamsha Rider is one of the three unique units of the Gurjaras in Age of Empires II: Definitive Edition - Dynasties of India. It can be trained at the Stable once the Castle Age is reached. It is a speedy cavalry unit that can "dodge" enemy projectiles, which is represented as a second, regenerating health bar which has to be depleted below a certain level before the unit itself takes damage. The second health bar regenerates even during combat, but only protects from projectile attacks - melee attacks bypass it completely. It is strong vs. archers and weak vs. Pikemen and Camel Riders.

If unable to utilize its dodge mechanic, however, the Shrivamsha Rider is underwhelming due to its mediocre stats for its cost. Camel Riders are their worst enemy, and Halberdiers are very cost-effective against them, so the Shrivamsha Rider should avoid fighting these units whenever possible. They are also counted as a unique unit, so Samurai will deal bonus damage to them. They also lose cost-effectively against Knights, but the Gurjaras' Camels can make short work of them. In general, melee units should be avoided by Shrivamsha Riders due to their mediocre stats and lack of base melee armor. Thankfully, due to their high speed, they can easily outrun just about anything they do not wish to fight.

Thanks to their dodge mechanic and acceptable damage output (despite lacking Blast Furnace), Shrivamsha Riders give the Gurjaras another good raiding unit. The Shrivamshas won't need to worry that much about defensive towers, though Town Centers and Castles could overwhelm their dodge mechanic due to multiple projectiles.

The Shrivamsha Rider is the second fastest land unit (only outsped by Imperial Age Cuman Scout Cavalry), giving it a huge edge when running away from unfavourable fights, raiding, chasing fleeing Cavalry Archers, and (most notably) catching up with Trade Carts.

As Shrivamsha Riders are unique to the Gurjaras, only technologies that are available to them are shown in the following table:

Comparison in the Post-Imperial Age with similar units[]

The special 'Shrivamsha' breed of horses was gifted by a Rajput chief to the Gurjara-Pratihara King Mihira Bhoja, and was described as being able to easily cross seas of sand.[1] 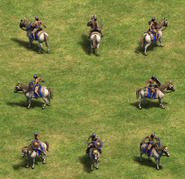