Age of Empires Series Wiki
Register
Don't have an account?
Sign In
Advertisement
in: Age of Empires III, Japanese, Houses,
and 3 more

The Shrine is a civilian/economic building in Age of Empires III: The Asian Dynasties that is unique to the Japanese. It acts like a House by providing 10 population, but also generate 0.14 food, 0.1 wood, or 0.1 coin per second; the Seven Lucky Gods Home City Card allows Shrines to generate 0.34 XP per second. All Shrines must produce the same resource – changing the resource trickle on one Shrine will change the production on all Shrines.

The Shrine will also attract animals into it to increase its resource trickle rate, compensating the fact that Japanese Villagers cannot gather Food from animals. Small game like Deer has the least effect (+0.07 resources/s), large game like Bison increases the trickle rate more than small game, and Herdable animals like Cows have the most effect (+0.11 resources/s.) The rates gathered by animals at Shrines are not affected by the Toshogu Shrine Wonder, Heavenly Kami Home City card, or Tempo Reforms technology. Shrines without nearby animals will give a very slow trickle, so it is wise to fill them with herdable animals as well as building them near flocks of huntable animals, as long as the player can protect the Shrines from enemies.

The Toshogu Shrine wonder increases the resource trickle rate of all Shrines and also acts as two Shrines.

As Shrines are unique to the Japanese, only technologies that they have access to are shown in the following table:

As Shrines are unique to the Japanese, only their cards and other civilizations' TEAM cards are shown in the following tables: 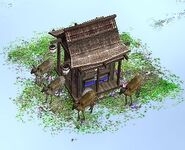 An in-game Shrine before Industrial Age 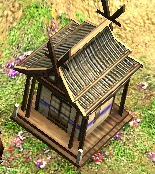 An in-game Shrine in Industrial Age
Community content is available under CC-BY-SA unless otherwise noted.
Advertisement