The Shotel Warrior is the unique unit of the Ethiopians in Age of Empires II HD: The African Kingdoms. It is a quick and frail infantry unit with a very high attack and creation speed.

Shotel Warriors excel at raiding because of their high damage and movement speed, and they can serve as a last minute defense due to their quick creation speed. Once Royal Heirs is researched, they can be massed very quickly. They train even more quickly than Goth infantry.

They are extremely effective at picking off Villagers, needing only two strikes to kill them in the Imperial Age, a feat few other melee units can boast. They also raid buildings quite effectively, although they should not take on defensive structures. If uncontested, a quickly-made group of them can destroy a Town Center in seconds.

Shotel Warriors are very squishy, with the Elite version providing only 1 pierce armor and 50 HP. Consequently, they die quickly to anything that has a fair amount of damage output such as Knights, Champions, or archers in larger numbers.

Still, in the early Castle Age they can be valuable when the player decides to place an offensive Castle because they can easily fend off enemy rams, thereby guaranteeing the Castle to stand. In open battles, Shotel Warriors are effective against siege units due to their high movement speed and attack.

Given the Ethiopian siege might, it is also a sound strategy to garrison groups of Shotel Warriors inside rams before sending them towards the enemy. Provided the enemy leans more towards archers and uses Castles and towers for protection, or that the rams themselves are adequately upgraded and escorted, large armies of the Warriors can be transported without much hassle into the heart of an enemy town where they can unload and cause major damage. The rams also serve as additional building destroyers during a siege.

The use of Shotel Warriors is situational as they demand a high amount of gold. In general, the Shotel Warrior is mostly meant to be used as a raiding unit, and a Shotel Warrior rush is a somewhat a better alternative to the Knight rush since a group of Shotel Warriors is more cost-effective than Knights for raiding enemy villages due to their high mobility and much higher attack (in conjunction with Arson) than Knights. In addition, the Ethiopians lack key important upgrades for their cavalry such as Bloodlines, Plate Barding Armor, and the Paladin upgrade, making the Ethiopian Knight rush far weaker than other civilizations' Knight rushes such as the Berbers, Huns, and the Franks. However, given the Ethiopians' strong economic bonuses with the free Pikeman upgrade in addition to their free food and gold whenever they age up, they have better alternative rushing strategies than Shotel Warriors or their below average Knight rush (such as a Feudal/Castle Age Archer rush).

As Shotel Warriors are unique to the Ethiopians, only technologies that are available to them are shown in the following table:

The shotel is a sickle-shaped sword which originated in Ethiopia. Its unique curved design allows the user to reach around a shield and wound the enemy's vital body parts. Against cavalry, the shotel could be used to hook and pull the warrior off the horse. 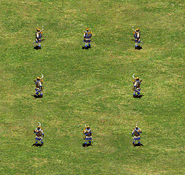 A group of Shotel Warriors

Eritrean Tigrinya warriors, one of whom wielded a Shotel, ca 1935 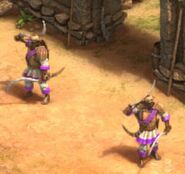 A couple of Shotel Warriors in the Definitive Edition

Shotel Warrior in the HD Edition and Definitive Edition
Español
Community content is available under CC-BY-SA unless otherwise noted.
Advertisement