Battle Axe and Short Sword (before the Definitive Edition)
The Short Swordsman is a hand infantry unit in Age of Empires. Though it is superior to and fills the same tactical niche as the Axeman, it is not a direct upgrade but instead a separate unit. It wields a short sword as its main offensive weapon.

This unit is similar to the Axeman in that they have normal speed, no range, and average damage and health. They are poor units to use against Cavalry, being slow and not having enough hit points. They usually get massacred by Academy units, due the Hoplite and related units having extremely powerful attack and very strong armor, making the Short Swordsman useful only against Tool Age infantry, or the equivalent light infantry in future Ages (this provided that they outnumber the enemy units).

Before the Definitive Edition it had a weapon upgrade prerequisite of Short Sword, which was itself dependent on Battle Axe. In other words, Clubman had to be upgraded for the Short Sword upgrade to appear. Once the upgrade was finished, Short Swordsman was available. 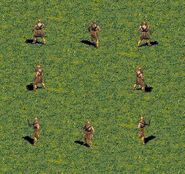 A group of Short Swordsmen. 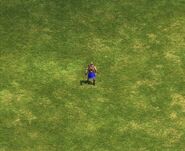 A Short Swordsman in the Definitive Edition
Español
Community content is available under CC-BY-SA unless otherwise noted.
Advertisement