Age of Empires Series Wiki
Register
Don't have an account?
Sign In
Advertisement
in: Age of Empires III, Japanese, Military buildings,
and 2 more

The Shogunate is a wonder in Age of Empires III: The Asian Dynasties that is unique to the Japanese and can be built to advance into the next Age. It gives the player XP and ships a Daimyo when built, and has Country in Chains which reduces the cost and training time of land military units, as well as being able to retrain Daimyo.

Country in Chains (passive): Reduces the cost of land military units by 5% and their train time by 10%.

Note: Daimyo Kiyomasa, Daimyo Mototada, and Shogun Tokugawa must be shipped from the Home City first before they can be trained at the Shogunate.

It is highly recommended to build the Shogunate to advance into the Industrial Age or Imperial Age due to its decent XP bonus that is for the Japanese (especially considering they can sent most shipments twice) and the Daimyo.

As the Shogunate is unique to the Japanese, only technologies that they have access to are shown in the following table.

As the Shogunate is unique to the Japanese, only their cards and other civilizations' TEAM cards are shown in the following tables:

The Shogunate's Age up choice picture 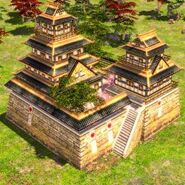 The Shogunate as it appears in-game

A photo of the Himeji Castle, which resembles the Shogunate
Community content is available under CC-BY-SA unless otherwise noted.
Advertisement