Stuns a group of enemy units
Shockwave is an Atlantean Archaic Age god power in Age of Mythology: The Titans that is available to worshipers of Oranos. When cast, it generates a strong energy wave which scatters enemy units in a relatively small radius.

Shockwave can be cast three times in a game, but has a cooldown of five minutes.

Once cast, scattered units are dealt 50 crush damage and are stunned for four seconds and are unable to defend themselves. This makes the units hit vulnerable to attack. Shockwave can either disperse a meat shield, allowing the player's own soldiers to pick out individual units, or make raiding more efficient by preventing villagers from escaping as quickly. The power itself does little to no damage so it should not be used if it cannot be followed up with an attack. However, it can also be used defensively such as for saving Citizens from an enemy raid. Shockwave can be used three times but has a recharge time of 5 minutes. 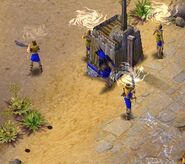 Certain units stunned by Shockwave. Notice that the affected units have a whirl above them.
Add a photo to this gallery
Retrieved from "https://ageofempires.fandom.com/wiki/Shockwave?oldid=233438"
Community content is available under CC-BY-SA unless otherwise noted.