Tambo on a House of Jagiellon palace

8 per House of Jagiellon palace

The Shock Rider is a melee cavalry Native warrior in Age of Empires III: Definitive Edition - Knights of the Mediterranean that can be trained at a Trading Post built on a House of Jagiellon palace.

The Shock Rider functions as a lesser version of the Hussar. They are available starting in the Commerce Age, have high speed and damage, but lack melee multipliers. Shock Riders are effective against ranged infantry like the Skirmisher and small groups of artillery, but they can be taken down by heavy infantry and ranged cavalry units.

Compared with Hussars, Shock Riders have less hit points and attack, slightly less Line of Sight and cost wood instead of coin, but they have higher speed and a reduced food cost. Additionally, Shock Riders resist both melee and ranged attacks, which makes them slightly more durable against units like the Pikeman or Musketeer in melee combat.

The Indian Friendship card ships 2 Shock Riders if the player had built a Trading Post on a House of Jagiellon palace. 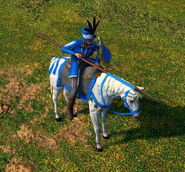