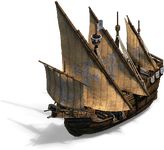 A ship or boat is a unit that moves on water, rather than land. Ships serve as resource gathering, trade, transport, or warfare units. Where water is a large part of the map, naval domination is often critical.

While all games in the Age of Empires series feature various ships, Age of Mythology also features a wide array of other naval units. The following list shows all available naval units for each major title.

Note that, as opposed to the Age of Empires games, not all military naval units are ships. There are also some naval myth units featured in the game. As this page is supposed to list all naval units, they are included here despite not being ships.

Note: Denoted with a * are myth units.