6
Shaybani Khan is a cavalry hero in Age of Empires II: Definitive Edition - Dynasties of India. He has a special model which he shares with Girgen Khan. As a hero, he cannot be converted and can regenerate health.

He appears as a player or in dialogues in the scenarios Pearl of the East and The Last Timurids, but the unit itself is not featured.

Muhammad Shaybani Khan (also known as Abul-Fath Shaybani Khan or Shayabak Khan or Shahi Beg Khan, originally named "Shibägh", which means "wormwood" or "obsidian") (c. 1451 – 2 December 1510), was an Uzbek leader who consolidated various Uzbek tribes and laid the foundations for their ascendance in Transoxiana and the establishment of the Khanate of Bukhara. He was a Shaybanid or descendant of Shiban (or Shayban), the fifth son of Jochi, Genghis Khan's eldest son. He was the son of Shah-Budag, thus a grandson of the Uzbek conqueror Abu'l-Khayr Khan. 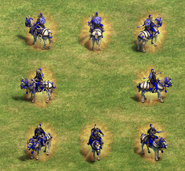