11
The Sharkatzor is a cheat unit introduced in Age of Empires II HD: Rise of the Rajas, which remained hidden and unused until the Definitive Edition. It resembles a cat riding a shark equipped with jetpacks, shooting laser beams at enemies (shoots cows before the Definitive Edition). The cheat code to access the unit is "catzor".

The Sharkatzor has a unique hover attribute, which allows it to move over both land and water. This may also allow it to pass through some buildings, units, objects and terrains, making it the only "amphibious" unit, and the only unit that can stack on each other in the game.

Keep in mind that while its laser beam does splash damage, it can also damage friendly units.

All technologies that enhance Siege Workshop units will benefit Sharkatzor. 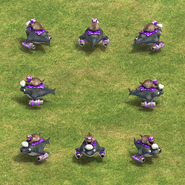 A group of Sharkatzors in the Definitive Edition

Several Sharkatzors attacking a Castle in Rise of Rajas