Age of Empires Series Wiki
Register
Don't have an account?
Sign In
Advertisement
in: Age of Empires III, Age of Mythology, Treasure Guardians,
and 2 more

The Shark is a natural unit appearing in Age of Mythology and Age of Empires III: The Asian Dynasties.

Wilds Sharks appear in Age of Mythology in scenarios and is available in the Scenario Editor. One can be seen in the first scenario of Fall of the Trident. They are only decorative, only being used as an embellishment for water.

For some reason, despite not being selectable (outside of the Editor), the Shark has a selection box, suggesting the shark could be used as a food source by Fishing Ships. The reason for it's possible removal is unknown.

The Nereid unit from Age of Mythology: The Titans rides a shark.

The Nereid (riding on a Shark) 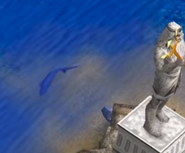 A Shark found swimming in the Omens scenario.

1.5
Named the Great White Shark, it is capable of inflicting heavy damage on early exploration vessels or destroying them if the player gets careless. A single shark may sometimes guard a Treasure; however treasures will more commonly be guarded by a pair of the fish. The Great White is one of the stronger guardians, but its water-only range limits its potency.

Wikipedia has an article about:
Shark 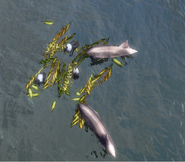 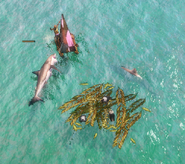