Age of Empires Series Wiki
Register
Don't have an account?
Sign In
in: Age of Mythology, Gameplay elements, Civilian buildings

Edit
watch 02:23
Wiki Targeted (Games)
Do you like this video?
Play Sound

2800
The Settlement is a gameplay element in Age of Mythology. Unlike in other games of the Age of Empires series, Town Centers cannot be placed anywhere on land and must be built on abandoned Settlement locations. This limits the areas in which Villagers can be trained, function as points for territory control (as most Settlements spawn/are placed near resources) and also negates any effort to rush with Town Centers.

Each and every random map in Age of Mythology features a variable number of Settlements across the land. Players must scout as much as possible to search for a convenient site to construct a Town Center, that can allow them to project power to distant sites (in essence, to increase their map control), as apart from their defensive value, they are the only buildings that can train Villagers.

In the Atlanteans' case, Town Centers are even more important, as they also provide favor.

In the original Age of Mythology, Villagers can lay foundations on these abandoned villages from the Heroic Age, and start building a Town Center. From The Titans onwards, Town Centers can be built in the Classical Age, though Atlantean Citizens can build them even earlier, from the Archaic Age. 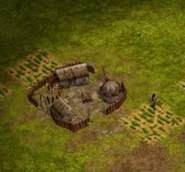 Settlement size compared to a villager working on a Farm

A Settlement which was previously owned by a Gaia player

Atlantean Citizens attempting to claim a Settlelment
Community content is available under CC-BY-SA unless otherwise noted.