Age of Empires Series Wiki
Register
Don't have an account?
Sign In
Advertisement
in: Age of Empires II, Lords of the West, Infantry

Can build and repair Donjons

The Serjeant is the unique unit of the Sicilians in Age of Empires II: Definitive Edition - Lords of the West. It is an Infantry unit which can construct (and repair) the Donjon, a defensive building similar to the Krepost, and notably has high armor, especially in the Castle Age.

Serjeants can be upgraded to Elite Serjeants in the Imperial Age.

Serjeants are a very peculiar infantry, as they are able to build (and repair) Donjons and can be trained in the Feudal Age, unlike any other unique unit. They can be seen as a variant of the Militia line with this peculiar quirk. Indeed, compared to a Man-at-Arms, a Serjeant in the Feudal Age has the same hit points, less attack and Line of Sight, and better melee and pierce armor. Still, Serjeants cost more than Men-at-Arms and need to be trained at a Donjon in the Feudal Age (which costs 175 Stone and 75 wood each, so it is a substantial investment).

Their ability to build Donjons enables Sicilians to perform a very peculiar strategy called Donjon Drop or Donjon Rush, and it can be done in the Feudal Age if the player has gathered stone beforehand (at least another 175 stone for making a second Donjon). For performing this, the player must go with few Villagers near an opponent's settlement, create the first Donjon, and then start spawning Serjeants, which should also create more Donjons near the opponent, especially near their main Gold and Stone Mines and their main Lumber Camp. The building time of a Donjon is the same for Villagers and Serjeants, so the initial Villagers can return to gather resources. Also, Donjons can garrison 10 units, but the number of arrows remain the same until the Castle Age. With enough resources, a Donjon Drop can snowball quickly, as it does not need the assistance of villagers, unlike a Castle drop, except for the first Donjon.

Once the player reaches the Castle Age, Serjeants automatically gain +20 hit points (for a total of 65 HP), +3 attack (for a total of 8), +1 melee armor, and +1 pierce armor (for a total 3/3 armor). Compared to a Long Swordsman, a Serjeant in the Castle Age is much more resilient against arrowfire and melee attacks, thanks to the extra armor. Still, its attack is a bit weaker than the Long Swordsman, and its attack bonuses are inferior to Long Swordsmen. However, its armor makes this unit more versatile than its Barracks counterpart, since it can be used to defend a location against different types of units (also, all Sicilian land military units have bonus damage resistance vs attack bonuses, so infantry counters are less effective). After the Castle Age, Serjeants must be the infantry of choice for Sicilians, unless the player has a shortage of stone for making Castles or Donjons. However, the Militia line of infantry is still a better counter against Eagle Warriors and Buildings, so there are situations in which the player may focus more on the Militia line rather than Serjeants.

The Sicilian unique technology First Crusade brings a muster of 7 Serjeants from each Town Center (maximum five Town Centers). This technology can still be researched even if the player has reached maximum population and is highly useful for an emergency if the player needs to defend but does not have enough troops. It can also be used to rapidly increase the player's army for a Serjeant raid against an opponent.

Serjeants fare much better than most infantry against their counters, due to their high melee and pierce armor, as well as the reduced bonus damage taken, but there are some units that can deal with Serjeants pretty well without problem. High-melee armor units, such as Teutonic Knights and Boyars can counter Serjeants pretty well. Jaguar Warriors and Samurai can be devastating due to their attack bonuses. Leitis can also counter Serjeants, since their melee armor is useless against them. The Obuchs are in a similar situation. Since their attack removes armor, they will easily erase the advantage of the Serjeants. Despite having their bonus damage reduced, Cataphracts can still effectively deal with an army of Serjeants, due to the trample damage, and their bonus damage is still enormously high for Serjeants, and finally, Battle Elephants and War Elephants destroy them due to their very high hit points, attack and trample damage.

As Serjeants are unique to the Sicilians, only technologies that are available to them are shown in the following table:

In the English and French feudal system, a serjeant is someone who performs tenure in return of a duty other than knight service.

Serjeanty originated in the assignation of an estate in land on condition of the performance of a certain duty other than knight-service, usually the discharge of duties in the household of the king or a noble. It ranged from non-standard service in the king's army (distinguished only by equipment from that of the knight), to petty renders (for example the rendering of a quantity of basic food such as a goose) scarcely distinguishable from those of the rent-paying tenant or socager.

The word comes from the French noun sergent, itself from the Latin serviens, servientis, "serving", the present participle of the verb servo, "to keep, preserve, save, rescue, deliver". 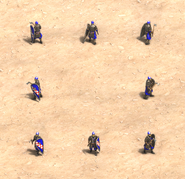 Different views of the unit.

Sprite of the Serjeant in Lords of the West.