Protects one own or allied Town Center with stone guardians
Sentinel is a Greek god power in Age of Mythology that is available to worshipers of Hades. When invoked on the player's or an ally's Town Center, it creates up to five Sentinels around that Town Center.

0
Sentinels are stone archers that will fire at any enemies within their considerable range. Although immobile, made of stone, and having armor stats comparable to buildings, Sentinels benefit from archer upgrades as they are considered archers, just not human ones.

Sentinels have decent attacking and defensive attributes. This god power is best used early in the game, as the statues can quickly kill enemy scouts and support units when defending a town. They are less useful from the Heroic Age as they are easily destroyed by siege weapons. Sentinel can also be used to combat a rush. Placing Sentinels early in the game then building other defensive structures such as towers and walls to protect the Town Center is useful for a turtling strategy. Sentinels are also useful to defend a recently built outlying Town Center. If there is an object blocking the place where the Sentinel would be created, the Sentinel will be created at the closest available space next to the object, if possible, otherwise, no Sentinel will be created, this is why it is important to keep the area around a Town Center clear. 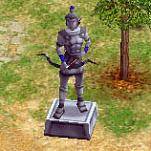 A Sentinel as seen from the front

A Town Center affected by Sentinel

The base of a defeated Sentinel cannot be built upon.
Community content is available under CC-BY-SA unless otherwise noted.
Advertisement