The Seminole are a Native American tribe featured in Age of Empires III. Like all natives, they can be allied with by building a Trading Post at their Trading Post site.

The language spoken by the Seminole is either Creek or Mikasuki, both belongs to the Muskogean language family.

"The name "Seminole" derives from the Spanish word for "wild men." They were originally part of the Creek tribe in Georgia, but migrated to Florida in the eighteenth century. They sought to live in territory only loosely claimed by Spain, and tried to stay out of the path of the expanding British colonies. North Florida was also a refuge for escaped slaves, who allied with the Seminoles. British colonists, and later Americans, began encroaching into Florida seeking land and chasing escaped slaves, especially after Florida became part of the US in 1819. Small clashes erupted into the first of three wars with the United States in 1817. The Seminoles proved very tough opponents, easily slipping back into the swamps and laying careful ambushes.

Future president Andrew Jackson led an invasion of Florida that eventually defeated most of the tribe in the first war. Attempts to move the Seminoles to Indian Territory (Oklahoma) in the 1830s caused a second war to break out. It dragged on at great expense and military loss to the US, but ended with most of the Seminoles being moved west. Perhaps 500 Seminoles remained in Florida in a reserve around Lake Okeechobee. These few survivors got into a third war of mostly guerrilla action that lasted from 1855-1858.

The Florida Seminoles were eventually granted several reservations near Lake Okeechobee and the Everglades." 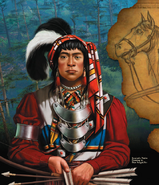 Seminole concept art
Add a photo to this gallery
Retrieved from "https://ageofempires.fandom.com/wiki/Seminole?oldid=261195"
Community content is available under CC-BY-SA unless otherwise noted.