10
The Sea Tower is an unconstructable Tower in Age of Empires II HD: The Forgotten. Sea Towers appear in a few campaign scenarios and are available in the Scenario Editor. Normally they can only be placed in shallow and deep water, but this can be circumvented by disabling the grid placement and collision in the Scenario Editor by pressing Ctrl+S twice.

Sea Towers make an appearance in the Path of Exile scenario, when Yodit tries to escape from Gidajan. They are found in one of the three forts blocking the escape routs, more specifically, to the one in the southeast.

Sea Towers can be found in The Conquerors by extracting certain game files, but cannot be found normally on default campaigns and are unavailable in the Scenario Editor. 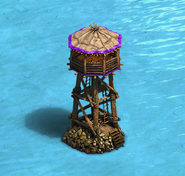 A Sea Tower in the Definitive Edition of the game.

The previous design of the building, dating back to The Conquerors
Add a photo to this gallery

Retrieved from "https://ageofempires.fandom.com/wiki/Sea_Tower?oldid=319825"
Community content is available under CC-BY-SA unless otherwise noted.