Chariot
The Scythe Chariot is an Iron Age cavalry unit in Age of Empires: The Rise of Rome. It is an upgrade of the Chariot and is only available to a few civilizations.

The biggest advantage of the Scythe Chariot over the regular Chariot is that it can inflict trample damage, inflicting damage on units and buildings adjacent to the unit or building it is attacking. Thus they can be a nice alternative to a War Elephant, preventing enemy Villagers from fleeing to a far location and restarting their town. As with its regular counterpart, the Scythe Chariot deals double attack towards Priests and is highly resistant towards enemy conversion.

The Scythe Chariot is an uncommon unit, and only these civilizations can train them:

Note: Nobility is the prerequisite for upgrading Chariots to Scythe Chariots, so this upgrade is automatically added

"Chariots went out of favor by the beginning of the last millennium BC in favor of cavalry. But they did not disappear completely. Some armies continued to use them and they remained a symbol of prestige. To make chariots more effective and fearsome, scythe blades were attached to the axles. As the chariot moved, the blades rotated through the air. A foot soldier facing an oncoming Scythe Chariot faced the prospect of being ridden down by the horse, shot by an arrow, stabbed by the soldier on board, or hacked by the blades. This could be a terrifying weapon against broken troops trying to flee. Against steady veteran troops, however, the Scythe Chariot was still a chariot with inherent weaknesses. If the horses could be wounded, the chariot faltered. The Persians attempted to use Scythe Chariots against Alexander the Great, but the weapon made little impression on the disciplined phalanxes."
—The Rise of Rome manual

Scythe Chariot in the Definitive Edition 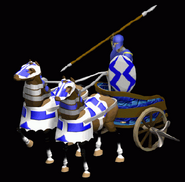 Scythe Chariot render
Add a photo to this gallery
Retrieved from "https://ageofempires.fandom.com/wiki/Scythe_Chariot?oldid=264036"
Community content is available under CC-BY-SA unless otherwise noted.