Age of Empires Series Wiki
Register
Don't have an account?
Sign In
Advertisement
in: Greek units, Myth units, Ships/naval units in Age of Mythology,
and 2 more

16 feet
Scylla in Greek legend was a ferocious many-headed sea monster. In Age of Mythology, the Scylla is an aquatic Heroic Age Greek myth unit available to worshippers of Dionysus.

Extra Heads: the Scylla gains an extra head for every three units it kills. Each head adds 50% to its base attack.

The Scylla is essentially a naval version of the Hydra, and as such can gain up to five heads, which multiplies their attack. Heads can be gained by destroying enemy military units, whether warships or land soldiers close to the water. However, with the introduction of the Physician in Tale of the Dragon, it has become easier for Scyllas to accumulate all five heads as they can now be healed after battling long enough. They are quite durable and are formidable naval units. Compounding this is that most civilizations lack naval Heroes, making Scyllas more difficult to defeat. Hammer ships are a serviceable replacement however.

A terrifying sea monster with six serpent heads and a ring of barking dogs around her waist, Scylla guarded one side of the straits of Messina, between Sicily and Italy. The dogs alerted her when a ship was passing so she could seize sailors. Scylla was originally a beautiful nymph who was transformed by the jealous sorceress Circe. 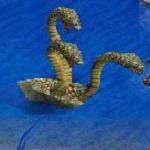 Wikipedia has an article about:
Scylla
Community content is available under CC-BY-SA unless otherwise noted.
Advertisement