Cannot be converted before 8 seconds

The Scout Cavalry is a light cavalry unit in Age of Empires II that can be trained at the Stable. In a standard game playing with a non-American civilization, but not Gurjaras, the player starts off with a Scout Cavalry. It has a weak attack, but is quick and are effective against enemy Villagers and Archers from the Feudal Age on. They have an innate resistance against conversion and a +6 attack bonus against Monks.

Scout Cavalry are available to all civilizations except for the Aztecs, Incas, and Mayans.

In the Dark Age, Scout Cavalry are primarily used as scouting units, as they do not have an attack powerful enough to be an effective battle unit. This also includes the collection of Sheep and other herdables, and locating resources for mining gold and stone.

However, upon researching the Feudal Age, Scout Cavalry are automatically upgraded and gain +2 attack, +2 Line of Sight, and +0.35 movement speed. Then, they are often used for harassing enemy Villagers. Civilizations like the Lithuanians (extra food), Magyars (cheaper cost and free attack upgrades), and Mongols (faster-gathering hunters, extra vision and extra hit points for their Scout Cavalry line) excel at performing a Scout rush. It might still be useful even until a bit after Castle Age hits due to its mobility, but the coming of Pikemen and the ever-increasing amount of Archers (who are also able to take them down easily in large enough numbers), soon to be upgraded into Crossbowmen, cause Scouts to be more and more underwhelming.

In the Castle Age, Stables are often used to train Knights instead, which are much stronger units with the same training time. However, in high ranked games, Scout Cavalry are often used in the early Castle Age, due to their ability to counter Monks. On Arena and similar closed maps where it is safe for the enemy to age up quickly, Monk-Siege pushes are common, which is only countered effectively by Scout Cavalry line and Eagle Scout line. The upgrade to Light Cavalry is available to all civilizations (bar the Teutons) and well worth obtaining for performing the above roles, as well as the fact that Light Cavalry are more useful as trash units than Scout Cavalry in the late game. 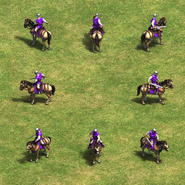 A group of Scout Cavalry

A couple of scouts in the Definitive Edition 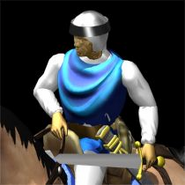 A render of the Scout Cavalry model 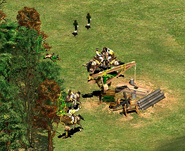