Age of Empires Series Wiki
Register
Don't have an account?
Sign In
Advertisement
in: Egyptian units, Myth units, Age of Mythology,
and 2 more

16 feet
The Scorpion Man is an Egyptian Heroic Age myth unit for worshipers of Nephthys.

Sting: poisons a few human units around itself, giving them a sickly green aura. The poison does 18 hack damage over 15 seconds. Recharge time: 12 seconds.

Scorpion Men are fast and deal a large amount of melee hack damage. Their poison sting attack means continuous damage to affected units, even after it is killed. They deal bonus damage against other myth units but are weak against Heroes, who are of course immune to being poisoned. Players may also choose to train Scorpion Men should they need strong support for their melee soldiers without having to spend more food or gold, as they cost mostly wood, a resource that Egyptians are not as dependent on.

Scorpions understandably had a large influence on Egyptian mythology. Ra's daughter, Selket, was associated with the scorpion, which graced her crown. In order to make her son, Horus, strong, Isis exposed him to scorpion stings in the desert. Scorpions were also associated with Set, along with other "wicked" animals of the desert.

There was indeed even a King Scorpion, a predynastic ruler known only from a few surviving artifacts such as the "scorpion mace". It is unclear whether the ruler's name or title were "scorpion" but the kingly figure on the mace is labeled as SQRT along with hieroglyphics of a clearly drawn scorpion sign.

Scorpion Man being attacked by Murmillo affected by its poison 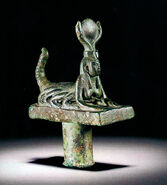 Statue of the goddess Serket that the Scorpion Man unit is probably based on. 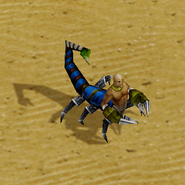 The icon of the Scorpion Man's deleted Venom upgrade.
Community content is available under CC-BY-SA unless otherwise noted.
Advertisement