The Scorpion is a light siege unit in Age of Empires II that can be trained at the Siege Workshop. The Scorpion fires large arrow-like bolts. It is effective against groups of enemy units as the bolts cause damage to multiple units in a straight line, although only the targeted unit gets full damage; all other units hit only get half damage. Unlike Mangonels, they do not damage friendly units. This can make all the difference in a pitched close quarters battle.

Scorpions are effective against slower, lower-health units, but they usually need to be used in large groups. Foot-archers are the primary exception to this, where a single Scorpion has a tactical advantage. Infantry and archers tend to be the units its slower-moving bolts have maximum efficiency against. Scorpions perform worse against Eagle Warriors, Woad Raiders, and cavalry, which can dodge its missiles and/or close the gap quickly, and Huskarls, Ghulams, and Eagle Warriors, who have higher pierce armor which can resist the Scorpion bolts. Scorpions, like most siege units, should be well protected, as their slow speed makes them vulnerable to attack. They are often paired with Pikemen to deal with enemy cavalry. This combination is often seen with the Celts and Slavs, who have bonuses for both units. They can also be paired with Genoese Crossbowmen, which help protect them against cavalry, and can also assist against other units, unlike Pikemen.

When used properly, Scorpions can be quite devastating. A medium-sized group of Scorpions can decimate whole armies of infantry and archers, and will even hold out against cavalry in sufficient numbers. Scorpions tend to be countered by Mangonels. Khmer (and their allies' Scorpions) are less vulnerable to Mangonels, as their Scorpions outrange them. Scorpions are also vulnerable to longer ranged units such as Bombard Cannons and Longbowmen. When maneuvered properly, Cavalry Archers, especially Mangudai can deal with Scorpions efficiently.

Comparison to the Mangonel[] 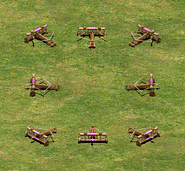 A group of Scorpions

The Scorpion (on the left) and its heavy counterpart

The line of Scorpions, with the standard Scorpion on the left. In Age of Empires II: Definitive Edition.

Render of the alpha Scorpion model

A replica of a proper scorpio, in a Roman reenactment event 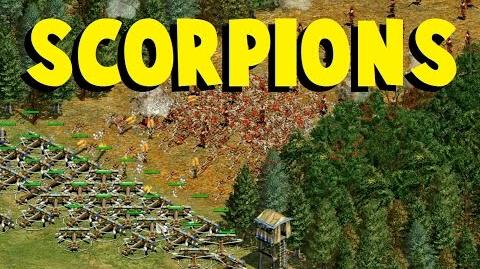