Age of Empires Series Wiki
Register
Don't have an account?
Sign In
Advertisement
in: Article stubs, Age of Empires III, Infantry,
and 2 more

The Schiavone (plural Schiavoni) is an infantry unit in Age of Empires III: Definitive Edition - Knights of the Mediterranean that is unique to the Italians.

The Schiavone is an infantry unit with low hit points and attack, but a long range and Line of Sight. Schiavoni are Rifle Infantry that counter light infantry units like foot archers and Skirmishers, which makes them unique among infantry units armed with rifles. In contrast, Schiavoni are slightly effective against heavy infantry, but lack multipliers against light cavalry, so they are unsuited to handle Dragoons or Cavalry Archers.

Schiavoni are trained in batches of seven at the Basilica for 300 food, 300 wood, and 300 coin, which take 60 seconds to train. These batches, however, are queued as shipments and they will be delayed if other Home City Cards have been sent before, but in exchange, they do not require the player to have available shipments to train them.

The Schiavone is automatically upgraded in the Fortress Age, Industrial Age and Imperial Age, but its name is not changed to reflect this.

The Schiavone speaks Croatian, which is also spoken by the Bosniak, Crabat, Mounted Infantry, Pandour and Shock Rider.

Schiavone image from the Compendium section 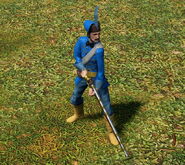