Age of Empires Series Wiki
Register
Don't have an account?
Sign In
Advertisement
in: Egyptian units, Myth units, Age of Mythology,
and 3 more

16 feet
The Scarab is an Egyptian Heroic Age myth unit available to those that worship Sekhmet.

When killed, it spews poisonous blood over enemy units within a 7.5 feet range, causing 40 hack damage.

Unlike most siege weapons in the game, Scarabs are living siege weapons, dealing great bonus damage against buildings. In groups, they can easily steamroll enemy towns. Scarabs are decent against human soldiers, but are more effective assaulting buildings; for this reason, it is often helpful to deploy an escort to eliminate enemy units, as it is with traditional siege weapons. They are, however, quite durable and can last long in combat. When killed, they will release a pool of blood that damages all units within a certain radius, in the same fashion as the Carcinos, Lampades with Asper Blood, and Terracotta Warrior. As with all myth units, they are weak against Heroes and stronger myth units.

One popular tactic involving Scarabs is the Scarab Rush or 'Scrush'. This semi-rush tactic involves advancing to the Heroic Age as quickly as possible and building three or four Scarabs (made much easier by the free one granted upon advancing an age in The Titans Expansion), along with an army of Chariot Archers. The archers should take out Heroes and other pesky enemy units, while the Scarabs demolish the opponent's buildings. Ra is a popular major god for those planning this strategy as Bast's Eclipse god power further strengthens the Scarabs.

Scarab beetles are a diverse group of insects that live in South America and Egypt. Egyptians adopted the scarab as sacred, and used it to represent Ra, who rolled the sun across the sky each day. The most famous scarab beetles roll dung into a ball, and then proceed to roll their treasure back to their tunnels.

Egyptians depicted scarabs in a variety of artwork, including amulets and "heart scarabs" which were large pieces hung on the neck or as a pectoral.

"You are my soul which is in my body, the god Khnum who makes my limbs sound. When you go forth to the Hereafter, my name shall not stink to the courtiers who create people on his behalf. Do not tell lies about me in the presence of the Great God!"

-- inscription found on a heart scarab in the Temple of Amun

Scarab dying and spewing its blood 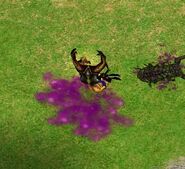 Another illustration of Scarab spewing blood

Wikipedia has an article about:
Scarab (artifact)
Community content is available under CC-BY-SA unless otherwise noted.
Advertisement