The Samurai is the unique unit of the Japanese in Age of Empires II. It is a fast-attacking infantry unit with an attack bonus against other unique units.

Samurai can be upgraded to Elite Samurai in the Imperial Age.

Samurai should be used to seek out the strongest late-game enemies, as they possess an attack bonus against other unique units. At first glance, The Samurai appears to be similar in combat to its equivalent swordsman from the Barracks, (the Long Swordsman in the Castle Age, and the Champion in the Imperial Age), the Japanese bonus to infantry attack speed makes them better in combat than swordsmen from most other civilizations.

The Samurai already innately has a faster attack rate than most infantry but combined with the Japanese civilization bonus of 33% faster attack speed gives them a lightning fast attack. Due to their attack bonus against unique units (10 for regular, 12 for Elite), the Samurai fares better in the late-game, when unique units play a bigger role in combat. However, Samurai aren't cost effective against Cataphracts and War Elephants. As with most sword-wielding infantry, they struggle against the Knight line, Scorpions, and archers.

Samurai perform well when paired with Pikemen (who also receive the Japanese infantry attack bonus) to answer cavalry, but against archers they need ranged support. They should be supported by the strong Japanese archers, Skirmishers, or Scorpions when dealing with an archer-using opponent.

The Imperial Camel Rider, Imperial Skirmisher and the Houfnice are the only unique units not to take the bonus damage from the Samurai, due to being unique upgrades of common units.

As Samurai are unique to the Japanese, only technologies that are available to them are shown in the following table: 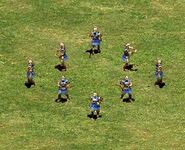 A group of Samurai 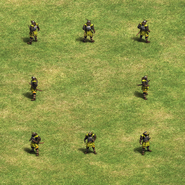 A group of Samurais in the Definitive Edition

Another image of the Samurai beta model 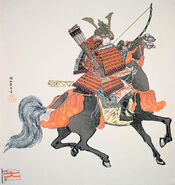 Samurai in the HD Edition and Definitive Edition