The Saloon is a military building in Age of Empires III: The WarChiefs that is available once the Commerce Age is reached. It trains various outlaw and mercenary units, and also generates 0.6 coin per second.

In the Commerce Age, only outlaws are available for "hire". With every Age up until the Industrial Age, mercenaries become available. The former are preset while the latter are randomly generated in each map. Mercenaries available at the Saloon in a game are shared across all players.

The "Advanced Saloon" Home City Card make Saloons support 20 population and allows them to be built in the Exploration Age, in addition to gaining +2 build limit.

The "Dance Hall" (United States)/"Cantinas" (Mexicans) card upgrades the Saloon to the Dance Hall/Cantina, which allows the player to hire Ronin and reduces the population used by outlaw units by 1.

As Saloons are unique to the United States, only their cards and other civilizations' TEAM cards are shown in the following tables:

A Saloon built near a Trade Route 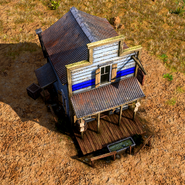 A in-game Saloon in the Definitive Edition